UI (User Interface) is the most important thing when it comes to user experience. We have seen great UIs over time. Its important to have great UI for the better productivity. If you have your self operated or seen enterprise applications, you know the fact that they are the worst when it comes to UI. Why still we have bad (you can also say, worst) UI on the enterprise applications? 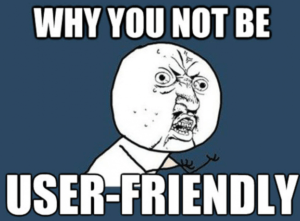 There are softwares with the best back-ends with great functionalities sometimes invisible behind the bad UI. Yes, the most important thing here comes the back-end functionalities. But the softwares are to be used by the back-end teams. To improve their productivity (and reduce their frustrations), good UI is must.

I found some interesting lines on stackexchange answer. It says:

In a typical enterprise setting, the opinions of the end users aren't awfully important, and they aren't the ones buying the software. Their managers appraise and buy the product, and the users are pretty much stuck with it. They can't say "we don't like it so we'll go over to a competing product". If they're extremely dissatisfied they can try and press the management into switching to a different product, but it's not easy.

Yes, they are stuck with it. For years!

There are softwares built in 90s for enterprise back-ends are still in production with no change in their UI. It also forces some factors to be in effect like, using older versions of OS for compatibility, also reduces the security. The web based consoles are forced to use with Internet Explorer 7 or below! Because no one bothers to update the UI to be compatible with the modern age browsers. But, the worrying thing comes when they are asking for a new product and still wants compatibility with IE 7.

We have seen some great UIs coming for enterprise applications with the evolution of startups. They are greatly focused on the better UIs with better productivity. It reduces the time user spends on repetitive or complex things, making it easily accessible and naturally understandable. Adopting new technologies is the key factor here. Sticking with the out-dated technologies is a lose-lose situation.

Better UI (or a decent one) reduces the frustrations of the back-end teams and improves their productivity. It ultimately results in a better end-user experience and satisfaction. It impacts on a greater extent.

Evolution is slow. It needs to be fast.